Steinkjerfestivalen- a little piece of Norway

The fog lay low over the river when on of the main atrractions for the day, Thomas Dybdahl, walked on stage at Steinkjerfestivalen. 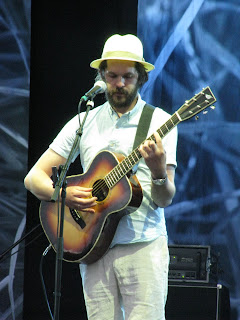 With a voice that can grab even the coldest heart, he captivated the audience with songs both from his latest album,Waiting For That One Clear Moment, and previous albums. The melancholy of the music seemed to fit the light rain of Steinkjer perfectly.

The next band up was Big Bang, a rock band that has made a name for themselves in Norway, but haven't had their breakthrough outside the borders yet.

I'm sure a lot of Norwegian music lovers will disagree with me on this, but I just can't get engaged with the show they put on. If it's the pouring rain or the music itself that kills my mood for Big Bang, I don't know, but it wasn't a great fit for this night.

Overall, the day was a success with some quality music and good company even if less rain would have been preferred.
Posted by Charlotte at 02:47 No comments:

It's been a while since I have been to a good and honest pop show. It's been so long that I have no memory of the last time, a sure sign that it's about time to change that.

Good pop music was the main attraction Friday at the Wireless Festival in Hyde Park. Artists such as P!nk, Plan B, The Ting Tings, Taylor Hawkins and the Coattail Riders and Gossip made the audience groove in the sunny park.

The first band I watched was Taylor Hawkins and the Coattail Riders. The band's music is catchy and has a definite Queen feel to it. No wonder why with even a guest performance by Queen's drummer Roger Taylor. 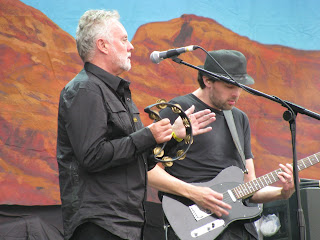 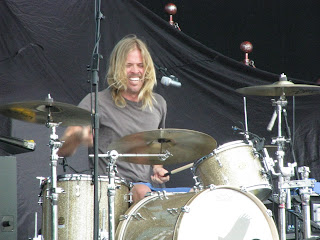 The band is tight, but maybe not right for the occation. With a crowd mostly waiting for the headliner of the day, P!nk, it's hard to get them going for a less known rock band.

The second artist of the day was London's own Plan B. The stage was set in a tent which was packed with eager Plan B fans. People were singing and dancing around, no wonder it got hot and sweaty in the tent. 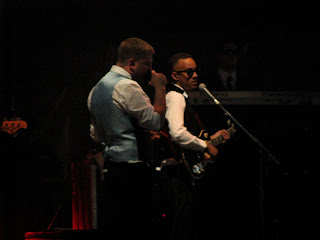 The show was equally hot. Dressed in a smart suit, Plan B entered the stage. The hits from the latest album, The Defamation of Strickland Banks, raised the temperature in the tent several degrees. Highlights included Stay too long, She said and Prayin'.

After a short food break, it was time for The Ting Tings. I have to admit that I hadn't heard anything from The Ting Tings since their song about a name that wasn't theirs was a radio favourite.

Most of the songs they perform are from the album We started nothing released in 2008. The catchy melodies are enough to make my feet move, but I would have liked later material in the mix.

After The Tings Tings walked off stage, you could feel the excitement from the crowd. It was time for the headliner, P!nk. Her show is certainly impressive. With 'circus' as theme, P!nk has several acrobats, dancers and musicians on stage. She even has practiced acrobatics herself and the show is not lacking of tricks and entertainment. 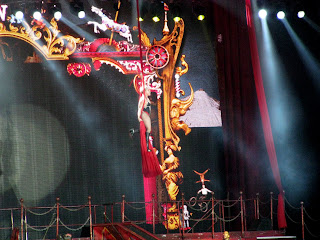 Musically it's not lacking either. She has a good voice and the show is packed with good pop songs. However, it's not all good. A part of the show is spent performing cover songs and the most obvious songs you can think of too. Why do covers when you have plenty of other hits you can still perform?

It felt good to be at a pop show again. I certainly danced aroung enough to be covered in the Hyde Park sand afterwards, which I have to admit, suited me really well.
Posted by Charlotte at 04:42 No comments: 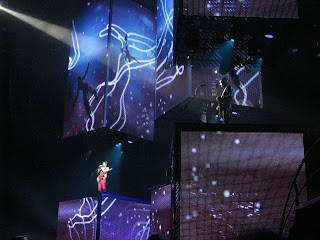 Amazing stage show
One thing can be said for sure about Muse's live show is that their stage set up for their new tour is spectacular. Each member of the band stands on a pillar that features an amazing light show. Almost that alone is enough to make the show entertaining. 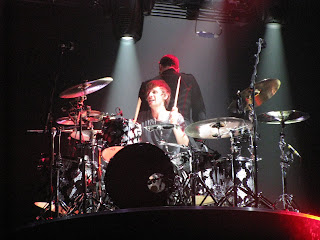 For me, their older music are the highlights of the gig. Songs like Plug in baby and Newborn are definitely songs that make me wish that that exact moment of hearing that exact song will last forever. 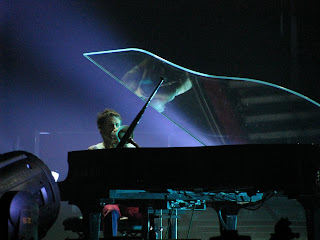 As for the song from their latest album The Resistance, I think the faster songs from the album work a lot better live than the ballads. The ballads from the The Resistance seem to be a bit of a down period of show that is otherwise very solid. The exemption from this would be Exogenesis which fit fit perfectly with the light show. 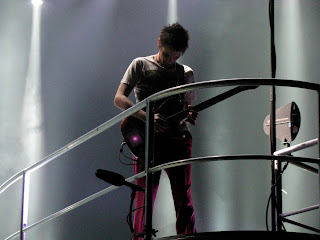 All through the show though, I kept thinking back to the gig they played at Royal Albert Hall. The gig at Oslo Spektrum definitely wasn't magic like that. Thinking of Megalomania live still bring forth the goosebumps I had that day. The gig in Oslo was great with an amazing stage set-up, but it just lacked a little bit of fairy dust. 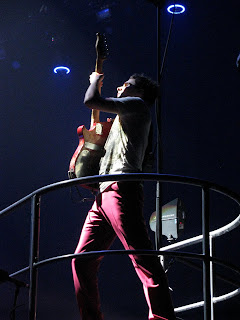 I would definitely try on Muse on this tour, if you still haven't. Their crativity stage wise and cracking energy still makes a great live show.

For more tour dates chack out the tour section.
Posted by Charlotte at 06:35 No comments:

The Germs at Water Rats
One thing is sure to be said about The Germ's fans; they sure how to make a great mosh pit. The band that play hard-hitting punk seeems to have some hard core fans in London, that made the atmosphere at the gig great. 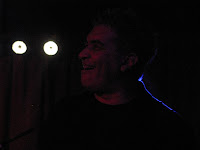 Pat Smear playing for The Germs
The band put on a good show. Among the punk heads and the large proportion leather in the audience, I somehow got the feeling that I don't fit in entirely.

Maybe not the gig I wil remember years from now, but good none the less.

Note to self: Next time you go to a punk gig, make sure you're punked up! 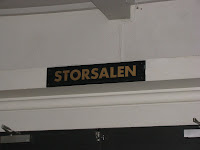 With an energtic performance and a crowd that almost outdanced Jesse Hughes himself, it was a night of fun and rock n' roll. 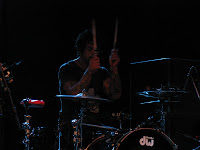 Joey Castillo on the drums

A rock night with "boys that are bad news" just have to be one of the perfect gigs to go to.

Posted by Charlotte at 06:05 No comments:

Eagles of Death Metal is taking over Europe. The band's European tour is starting today with their gig at the UKA festival in Trondheim. I will be there.

Stay tuned for a rockin' report.
Posted by Charlotte at 11:49 No comments:

Florence and the Machine

On the 14th of December I'll be seeing Florence and the Machine live at the O2 Brixton Academy.

I've never seen her live before, so it'll be a new musical experience for me.

Here's a taste from her gig at Reading Festival this year.

Florence and the Machine will be touring Europe and the UK this autumn. Tour dates can be found here.
Posted by Charlotte at 13:10 No comments: 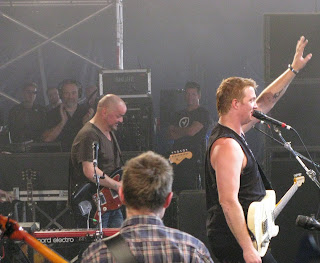 Them Crooked Vultures on stage at Reading Festival 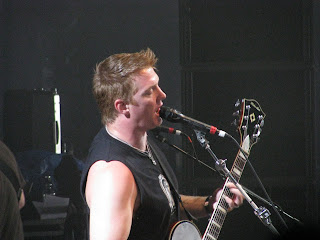 I got to Reading too late to see Spinnerette, but I made up for it by watching Them Crooked Vultures from side stage. 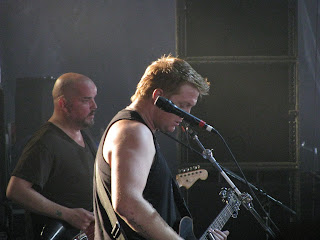 The Radio 1 tent was packed for the gig. From side stage you could literally see the steam coming from the crowd. It was hot, it was sweaty and it was rock. 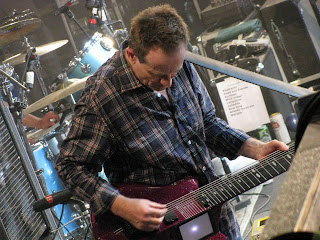 Them Crooked Vultures seemed to really enjoy playing at Reading and the crowd seem to love their material. Dead end friends and Elephant have become favourites of mine, just can't wait to hear the recorded version of the songs. 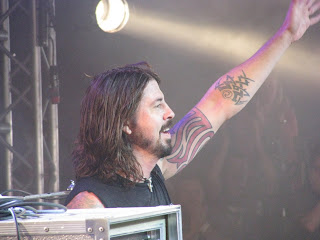 Dave Grohl says thanks to the crowd

Later in the evening, I watched The Prodigy play the main stage. I've always liked their music, but never seen them live before. Their energy on stage is vibrant. It makes you want to dance around and have a good time. It's definitely a band I would like to see in a smaller venue the next time they play in London.

The headliner of the day was Arctic Monkeys, but I have to admit that I didn't get to see much of it. I would like to know how the show was though, even though I've never been a huge Arctic Monkeys fan.
Posted by Charlotte at 04:00 No comments:

All the pictures appearing on this blog are taken by me. Please contact me if you wish to use some of them. Thanks!